Recently while developing a workout sharing feature for my app Personal Best, I needed to figure out how to turn a SwiftUI view into an image that people could share.

I struggled with this for a while but in the end got it to work. In this article I’m going to talk about what I discovered about UIKit and SwiftUI, some unsuccessful attempts I tried, then finally what I did in the end to get it working correctly.

The problem is quite straightforward. We can easily create an image from any view in UIKit, but SwiftUI views don’t have this ability. So, we need some way to convert a SwiftUI view to a UIKit one.

After some research, I found a code snippet on GitHub that I could use. I copied it into a new SwiftUI project as a proof of concept, and it seemed to work perfectly.

The most important parts of the code are the extensions on View and UIView, so let’s take a look at those. I’ve added some comments to the code to explain what’s happening at each point.

This did work perfectly in the proof of concept, but as soon as I tried to integrate it into my app I ran into a problem. The view I wanted to turn into an image included blur effects and a map view, and neither of those were appearing in the final image. In the case of the map view, the map was there but the image was captured before the tiles had a chance to load. 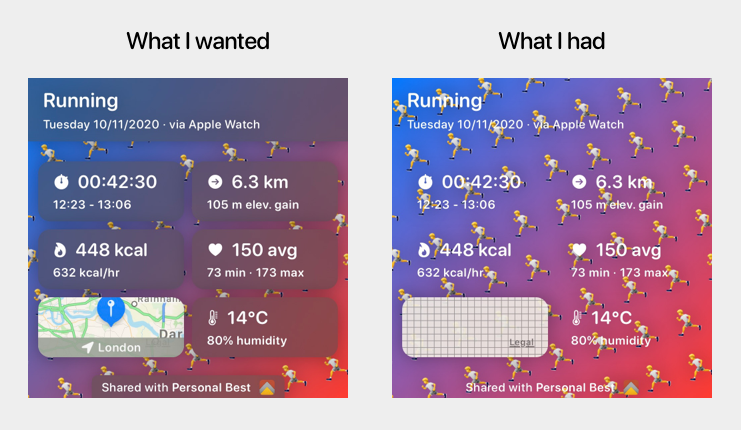 I read some Apple documentation and discovered the drawHierarchy API, so I tried using this instead. I changed the UIView extension to look like this:

I have no idea why, but this just produced a white square.

Setting aside the white square issue, I thought about the problem a bit more. I was creating a copy of my SwiftUI view and then capturing it before it had time to finish updating, which is why the map tiles were blank. I looked around for a way to delay the image capture until the view had time to update but didn’t find anything. I also experimented with using sleep and wait as hacks, but they didn’t work for me either.

I decided to take a different approach. If a user manually screenshotted the screen and cropped it, the image would be perfect. Is there a way I could do that programmatically? After quite a lot of trial and error I figured it out.

Here’s how the code for that looks. I’ve added comments to each line to explain what’s happening.

I tried it and it worked! My image came out with all the UI elements exactly as they were shown on screen.

This solution isn’t perfect. For one thing, it’ll only work for views that are fully on screen. It’s also bound to the scaling factor of the device it runs on, so running this on a 2x screen will produce a smaller image than running it on a 3x screen. That being said, it works for my needs and it gives me a good base from which to iterate if I need more advanced functionality.

As SwiftUI matures I expect it’ll gain more of this functionality ‘out of the box’ so these workarounds aren’t needed. For now, this does the trick.